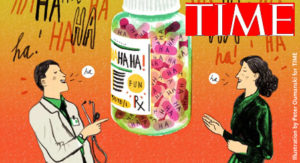 Your body could use a belly laugh

It may not be the best medicine. But laughter’s great for you, and it may even compare to a proper diet and exercise when it comes to keeping you healthy and disease free.

That’s according to Dr. Lee Berk, an associate professor at Loma Linda University in California who has spent nearly three decades studying the ways the aftershocks of a good laugh ripple through your brain and body.

Berk says your mind, hormone system and immune system are constantly communicating with one another in ways that impact everything from your mood to your ability to fend off sickness and disease. Take grief: “Grief induces stress hormones, which suppress your immune function, which can lead to sickness,” he says. Hardly a week goes by without new research tying stress to another major ailment.

Why mention stress? “Because laughter appears to cause all the reciprocal, or opposite, effects of stress,” Berk explains. He says laughter shuts down the release of stress hormones like cortisol. It also triggers the production of feel-good neurochemicals like dopamine, which have all kinds of calming, anti-anxiety benefits. Think of laughter as the yin to stress’s yang.

Thanks largely to these stress-quashing powers, laughter has been linked to health benefits ranging from lower levels of inflammation to improved blood flow, Berk says. Some research from Western Kentucky University has also tied a good chuckle to greater numbers and activity of “killer cells,” which your immune system deploys to attack disease. “Many of these same things also happen when you sleep right, eat right, and exercise,” Berk says, which is why he lumps laughter in with more traditional healthy lifestyle activities.

Berk has even shown that laughter causes a change in the way your brain’s many neurons communicate with one another. Specifically, laughter seems to induce “gamma” frequencies—the type of brain waves observed among experienced meditators. These gamma waves improve the “synchronization” of your neuronal activity, which bolsters recall and memory, Berk says.

How does laughter accomplish all this? That’s where things get murky, says Dr. Robert Provine, a neuroscientist at the University of Maryland, Baltimore County and author of Curious Behavior: Yawning, Laughing, Hiccupping, and Beyond.

Provine calls himself a “reserved optimist” when it comes to laughter’s health-bolstering properties. “One of the challenges of studying laughter is that there are so many things that trigger it,” Provine explains. For example, you’re 30 times more likely to laugh around other people than when you are by yourself, he says. Social relationships and companionship have been tied to numerous health benefits. And so the social component of laughter may play a big part in its healthful attributes, Provine adds.

Here’s why that matters: If you’re going to tell people they should laugh to improve their health, there may be a big difference between guffawing on your own without provocation, watching a funny YouTube clip or meeting up with friends who make you laugh, Provine says.

“That doesn’t mean the benefits aren’t real,” he adds. “But it may not be accurate to credit laughter alone with all these superpowers.”

But even for researchers like Provine who aren’t ready—at least not yet—to coronate laughter as a panacea, he doesn’t dispute the benefits associated with a hearty har har. He only questions science’s current understanding of the underlying mechanisms.

And keep a sense of humor. It doesn’t mean you have to tell jokes. If you can’t think of anything else, when you’re my age, take off your clothes and walk in front of a mirror. I guarantee you’ll get a laugh. — Art Linkletter